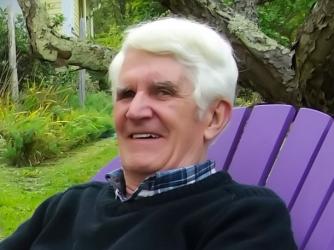 Michael was a long-time resident of Mahone Bay. He was born in Lunenburg, February 7th 1939 and he passed peacefully June 21, 2019 in Lunenburg with a full life lived in between.

He was predeceased by his wife Lila, who he first started pursuing as a young boy at church camp and was happily married to for over 50 years. Also predeceasing him were his mother and father, (Jean and Michael Sr) and his sister, Josephine. He is survived by his children, Michael (June), Kathleen (Glenn) and Tim (Yvonne); grandchildren, Adrienne, Alexander, Maggie, Meghan, Glenn, Sean, Ryan, Jayne and Michael; sister, Melissa and brother, Terry.

After completing high school in Lunenburg in 1957, Dad set out to start his life journey. For five years he worked on the Vema, a research vessel for Columbia University based in New York. In his fifth year, after many voyages and love letters sent from across the world, he convinced Lila, the love of his life, to marry him. Soon thereafter, they returned to Nova Scotia and settled in Mahone Bay to start their careers and build their family. Dad attended the Teacher’s College in Truro and taught at Mahone Bay, Chester and Forest Heights. In his retirement he spent his time volunteering, chauffeuring his grandchildren, writing and playing music. He enjoyed every moment!

He was an educator, a musician, a sailor, a volunteer, a friend and a family man who touched the lives of everyone he met.

When we think of Dad, we’ll remember his kind smile, his soft spoken ways, his charming wit and of course Lila by his side, because she wouldn’t have it any other way. We were blessed to have the time with him that we had, and we enjoyed it so very much. He, and mom, will be with us forever.

The family would like to thank his friends for their support, especially these last few months. Dad greatly appreciated it. They would also like to thank again all the wonderful health care providers that supported him during his illness. In Nova Scotia, we are so fortunate to have such dedicated people working in our health care system. Special thanks to Doctors Wood, Bailly and Gowan (nee Morrow). Good Lunenburgers!