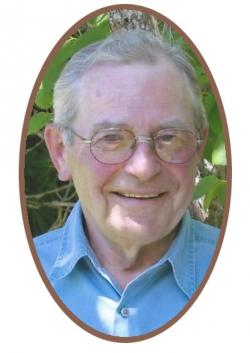 With great sadness, the family of Chris Nolan, age 86 of Oakland Road, Mahone Bay, announce his passing on July 19, 2019.

Born in Edinburgh, Scotland, Chris was among thousands of children evacuated to Canada in the Second World War, landing at Pier 21 in Halifax in 1940 and moving to Yarmouth to live with his grandmother, Mary Katherine Vickery.

Chris studied pharmacy at Dalhousie University, graduating with high honours and winning two gold medals in 1957. While at Dal, he met and married Geraldine (Geri) Freeman of Caledonia, N.S. The couple later moved to Bedford, where Chris established Sunnyside Pharmacy, and they raised three children, David, Stephen and Melanie. Chris became very well known in Bedford, where he served on countless committees, town council and as deputy mayor, and helped lead the establishment of recreation facilities, environmental policies and planning priorities for the town. A visionary leader in pharmacy as well, Chris was a founding director of the Pharmacy Association of Nova Scotia (PANS) and chaired many boards and committees of pharmaceutical organizations, provincially and nationally. He was a pioneer in creating one of pharmacy’s earliest computerized patient records systems, providing specialized pharmacy services to nursing homes, introducing group insurance plans for pharmacists and certified dispensers, and developing guidelines for private third-party insurance programs.

Chris received many awards for his contributions to his community and profession, including the prestigious Robins Bowl of Hygiea for Community Service and PANS’ first-ever Member of the Year Award, created in his honour.

He and Geri moved to the Mahone Bay area in the early 1990s, where he was a member of the Mahone Bay Area Lion’s Club, the first chairman of Trinity United Church Council, and chairman of the Oakland-Indian Point Residents’ Association.

Always a lover of the outdoors, Chris was an avid canoeist, skier, sailor and traveller, enjoying nothing more than a quiet paddle on Keji lake. In his spare time, he fashioned stained glass windows and lampshades, and fine furniture from wood.

His family remembers him fondly for his dry wit, sharp intelligence, patience, fairness, kindness, and grace.

The great sorrow of his life was the loss of his son, Stephen, in 2009.

He is survived by wife Geri, son David (Tracey), daughter Melanie (Keith), and grandchildren, Alexander, Ian, Peter, Benjamin and Mariel, as well as many cousins.

In lieu of flowers, donations may be made in Chris’s name to Dalhousie Medical Research Foundation and/or Trinity United Church.

A celebration of Chris’s life will be held at 2 p.m., Wednesday, July 31 at Trinity United Church in Mahone Bay.