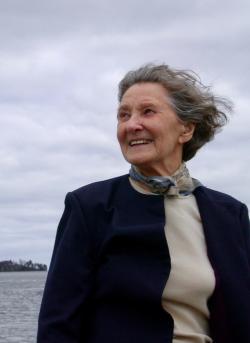 Joan Kathleen Wallis died at Mountain Lea Lodge, Bridgetown, Nova Scotia on August 19, 2019 at age 101. Renamed by her siblings as St. Vitus for her boundless energy, Joan was born into turbulent times on November 9, 1917 in Penwortham, Lancashire, England. The 1st World War, the Russian Revolution, and the Halifax Explosion raged across her world. Her father, Joseph William Dandy, her mother Beatrice Emily Dandy (née Birch), and her siblings, James, Doreen, Audrey and Marjorie shielded her well. “I must get on!” she often said, and get on she did — from walking 20 miles over the Fells, to theatre, dance, tennis, swimming, cycling, field hockey, gymnastics, rowing, writing and art. Denied Art School in London (the vortex of vice) by her father, she settled for a diploma in domestic science from Gloucester College, graduating in time to teach in the Birmingham slums in the opening year of WWII. She survived the Blitz and met and married Douglas Lyell Wallis in 1942. They moved to Linslade, Buckinghamshire, later the site of the Great Train Robbery. There she gave birth to Beatrice Susan Wallis, Dorothy Barbara Wallis and William Keith Wallis.

In July, 1952, with her children in tow, Joan crossed the Atlantic Ocean on the Empress of France to join Doug, having said her goodbyes to all she knew. King George had died and Elizabeth had taken the throne. As an engineer for Avro, Doug took his family from Toronto to Cold Lake Air Force Base in its raw days, where Jonathan Norman Wallis (1956-2016) was born. Then back to Toronto to witness the tragic death of the Avro Arrow. As a result, the family moved to Binghamton, New York, then back to Montreal, then Newington, Ontario. Joan taught nursery school in Montreal and French in Ontario. They moved to New Brunswick where they wound up their working years, retiring in 1981 to a beautiful home on Bush Island on Nova Scotia’s South Shore.

In 1984 they chose to live out their days in their beloved Mahone Bay. There, Joan returned to her writing. An avid reader, she was a lover of words: all words — ancient, exotic, mystical, contemporary, and of course, the faithful ordinary. Her poetry and stories reflect her love of language and people. Joan never shied from her opinions. Nor did she curtail her curiosity, which instilled in her a fear of dying. “I shall never die” she announced at age 101. “How can anybody want to die? Don’t they want to know what happens next?” However, her tired body had other plans.

Joan is predeceased by her parents; her siblings; the love of her life, Doug; her youngest son, Jonathan; and son-in-law, Ronald Hawkins. Her sharp wit, wry humour, and boundless energy will be missed by those who survive her, including children, Susan Hawkins, Barbara Cullen (John), Keith Wallis (Elaine); grandsons, David Cullen, Peter Cullen (Shelley), Michael Cullen (MarLee), Joseph Cullen (Mareike), and their Aunt Mary Cullen, a special friend to Joan; previous son-in-law Robert Tiarks; and many cherished nieces, nephews and friends.

Her burial will be private. However, a Celebration of Life will be held Saturday, October 12th, in the Abriel Room of the Mahone Bay Centre, from 2-4 PM.

A special thanks to the lovely staff of Mountain Lea Lodge, who made Joan’s last few years happy and comfortable.