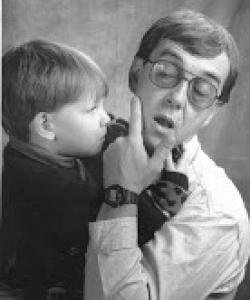 Paul Michael Brunelle, of New Cornwall, Nova Scotia, passed away at home on Saturday, January 18, 2020 at the age of 67.

Paul was born to Father, Paul Joseph Brunelle and Mother, Gwendolyn Pearl Brunelle (Myers) on November 7, 1952 in Halifax, Nova Scotia. He grew up the eldest of three children, and attended Elementary school at Southdale in Dartmouth. He attended numerous other public schools in both Dartmouth and Ottawa and completed Highschool at Dartmouth High. He attended The Nova Scotia College of Art and Design from 1971 - 1976, graduating with a Bachelor of Design in Communication Design.

In 1977 with Partner Dereck Day he founded Graphic Design Associates (GDA) in Halifax, Nova Scotia. Through GDA Paul developed a strong reputation, sited as being “A laconic man with the modulated voice of an experienced late night radio host.” He was National President of Graphic Designers of Canada from 1992-1994, as well as President and Treasurer of the GDC Atlantic. He championed a love for local business and strong communication between different professionals in the field, with much of his work still readily accessible today. Notable examples of this would be the Nova Scotian Health Card depicting Kejimkujik Park, or his Scotia Festival of Music Series throught the mid to late 1980s.

In 1978, he met Meredith Bell at a gathering at his apartment on Victoria Road. Neither of them realized it, but this was only the beginning of their storied relationship. In the late 1980s, Paul subcontracted Meredith, then of Next Step Graphics, for projects in the field of design. After numerous successes, they decided to take on their most ambitious project to date, which culminated in the birth of their son Michael Erin Brunelle on March 14, 1991.

Throughout Paul’s life he had a passion for natural history and the outdoors. This eventually led him to devote his life to the study of the dragonflies and damselflies of the northeast, at the time relatively poorly known. Throughout the late 1980’s and until his death Paul’s interest in damselflies and dragonflies never flagged and became his primary vocation. Funded by a number of agencies, his insect survey work took him to some of the most remote bogs, streams and marshes of the Maritimes and Maine, usually alone, and often at risk of sinking into a quagmire.

An early highlight was his 1995 discovery of a new species of dragonfly, the Broad-tailed Shadowdragon (Neurocordulia michaeli), which he described in the scientific literature and named for his son in 2000. A dusk-flying species, Paul discovered larvae in the Canoose, a cool, clear, rocky stream in Charlotte County, New Brunswick. The find was significant (it had been nearly half a century since anyone had discovered a new shadowdragon in North America) and led to dragonfly specialists from across the continent making the trek to southeastern New Brunswick when the 1996 annual meeting of the Dragonfly Society of the Americas was held in St. Stephen, N.B. to mark the discovery.

Paul had a deep understanding of the value and importance of natural history collections. His data collection was meticulous, with his specimens deposited in a number of museum collections. Most of his collections are now housed in the New Brunswick Museum, which holds one of the largest dragonfly and damselfly collections in Canada, largely due to Paul’s efforts.

The scope of the NB Museum collection reflects not only Paul’s decades of field study, but just as important, his huge impact on other natural historians in the region. Paul was a teacher without peer who encouraged many others in the study of the flying dragons he found so marvellous. He particularly enjoyed working with young people, and a number of students he took under his wing are now pursuing graduate degrees in the study of insects at Canadian universities. In the months prior to his death Paul completed the draft of his magnum opus, Atlas of the Dragonflies and Damselflies of Acadia (Maine and the Maritimes). This 400 page manuscript, written, designed (reflecting his love of Helvetica!), and replete with illustrations he prepared himself, will hopefully eventually be published, a fitting tribute and legacy to both Paul and the insects he loved.

He is survived by his Son, Michael Erin Brunelle; and Sister, Therese Goodyer and her Children, Andrea MacLeod and Peter Mortenson.

Paul was cremated on Thursday, January 22 under the direction of Mahone Funeral Home.

The family is grateful for condolences and invites those that wish to pay respects to Paul’s life and legacy to make a donation to the NB Museum Christie Fund, established to support the study of natural history in the Maritimes and which supported some of Paul’s work.