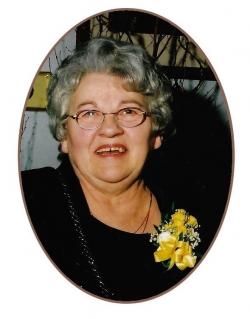 It is with great sadness that the family of Marilyn Joan (Tanner) Dares, 83, formerly of Back Centre, announce her passing on Thursday, February 6, 2020 at South Shore Regional Hospital, Bridgewater.

Born in Stonehurst, Lunenburg County, October 1, 1936 she was the daughter of the late Raymond and Mayola Tanner.

As an adolescent, Marilyn did housekeeping chores and child care for other households in the Stonehurst area. As a seventeen year old, she worked one summer as housekeeper at the Boscawen Manor in Lunenburg. From the mid-seventies into the early nineties she sold locally as a Regal Catalog representative. From 1978 through to 1981, she worked as a server for the Centre Consolidated School lunch program. Marilyn spent the majority of her prime years staying at home and made a loving home for her four adored children, the love of her life and their many grandchildren. Her kitchen was her stage. Her cooking and baking was her art and a truly talented artist she was. The larger number of people that sat at her table the happier she was to feed them all.

Her passion was for Rayburn and her family, first and foremost, and then cooking, baking and her shared love with Rayburn of tending to their many vegetable gardens. Marilyn and Rayburn from the mid-seventies to the mid-eighties never missed a Saturday night of dancing, including driving to Halifax or Dartmouth, with David and Christine Dares and Raeburn and Evelyn Knickle if there were no local dances available.

She was predeceased by her parents Raymond and Mayola; husband, Rayburn; brothers, Owen and Edgil.

Please monitor this webpage for any service rescheduling
that may be necessary due to weather conditions.