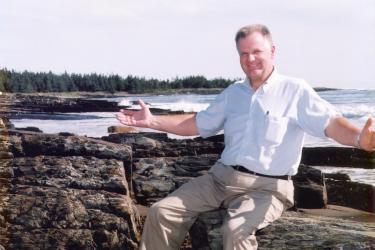 Bob was born in Liverpool, NS and spent his first five years living in Oakland with mother Marion and sister Nancy at the home of his maternal grandparents, Freelove and Harris Zwicker, while father Burke was overseas serving with the West Nova Scotia Regiment during WWII. His father had volunteered for service and had sailed for England in a troop ship in the fall of 1939, and returned in 1945, so Bob was five years old when he and his father met for the first time. The family returned to Milton, NS, where Bob attended Milton School, and then Liverpool Regional High School. He started his working life in Milton in his teenage years with an industrious and creative sales approach, selling everything from outhouses to appliances, and working for two summers in the Mersey wood camp near Caledonia, Queen’s County. After high school he went to work at the Bank of Montreal in Liverpool. The world of finance was of great interest to Bob - he excelled and advanced quickly and before long he was transferred to the main branch of the Bank of Montreal in the Maritimes, at Saint John, NB, where he developed life-long relationships and a foundation for future business success. During this time he was very active in the youth groups of the Baptist Church in St. John, and he eventually decided to prepare for the ministry. He studied for several years at Acadia Divinity College in Wolfville, NS, but then moved to Moncton, NB to work at Steeves’ Motors and Modern Construction. RWB had a passion and zeal for sales and by the time he settled in Mahone Bay in 1970 with his wife Bertha and two young daughters, his career in islands and ocean front properties had begun in earnest. Within a few years RWB was nicknamed by Time Magazine, The Financial Post Magazine and the New Yorker as “The Island King” and his international real estate career blossomed. Bob developed his career around his life-long love of the oceans, forests and farms of the world, and participated in the International Real Estate Convention (FIABCI) serving on the executive for many years and attending conferences around the globe, returning home with “wild and woolly” real-life stories and photographs that he loved to share among family and friends. He established several companies that pursued his range of interests, including RWB Douglas and Associates (real estate), Douglas Construction Limited, Douglas Forest Products and Woodex Atlantic. Over the next fifty years Bob was an active member of community government in Mahone Bay, serving on Town Council and involved in many town projects, including The Mahone Bay Wooden Boat Festival, the Mahone Bay Civic Marina, the Mahone Bay Centre, and the Mahone Bay Heritage Boatyard Co-Op, to name a few. He applied his practical knowledge and common-sense approach to problem solving to issues large and small, to the benefit of his local community and family members, alike. “Uncle Bob” was always ready to host woodworking afternoons with great nephews Ian, Elliott, Timothy and Hugh during summer vacations and was quick to entertain with stories and maybe a little jesting for great nieces Charlotte, Hannah and Matilda.

As with many fine things in life, Bob was an “intense flavour”, with complex undertones; respected for his vast knowledge of many things, a tenacious spirit and a leader. He will be missed by his family and friends and the many individuals he influenced throughout his life. He was a man of conviction, appreciative of the finer things and the simpler things, especially things handmade, and a fine Maritimer. He was generous with his time and tales, and truly earned a special place in all of our hearts.

In the words of Tim Linder: "It was very sad learning of my Uncle Bob's passing, but this sadness will not be how I remember him. Many fun summers were had as a young boy with my cousins Elliott and Hugh in Mahone Bay, creating keepsakes and memories in the woodshop across the street from his house. Those moments will never be forgotten."


Our Professional “At Need” and “Pre Need” Services continue to be available by appointment by calling 902-624-8241.

Throughout your daily lives, please practice “Physical Distancing” ... the length of a hockey stick away from each other. Nova Scotia continues to be under a health state of emergency. Wash your hands with soap and water often or use hand sanitizer if necessary. Wearing a mask and physical distancing is mandatory when visiting a public or private business or building. Do not touch your face, eyes or nose with your hands at any time. Above all ...BE SAFE, BE KIND, BE PATIENT.