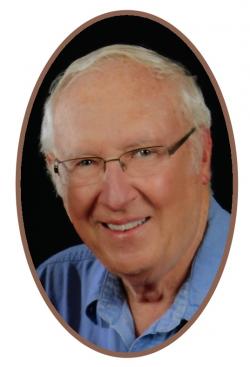 Franklyn came into this world on Sept. 9, 1940 and was the apple of his mother’s eye, as they waited for his father to return from the Second World War overseas duties.

He was pre-deceased by his parents, Dawson Burgoyne and Hilda Burgoyne (nee Nauss).

Frank is survived by his wife of 58 years, Shirley (nee Ernst); his children, Shelley (Wade), Blair (Stephanie); adored granddaughters, Lola and Drew; sister, Jane (Brent), as well as many cousins, nieces and nephews.

Frank’s enthusiasm for meeting people became the basis of his professional life, whether at the Kinburn Pharmacy dispensary in the early days, or while discussing insurance (and many other topics!) at a kitchen table or an office desk. His curiosity and interest in others were the root of his warm and engaging personality, and he was a good friend to many, as he connected with and enjoyed, people from all walks of life. This remained undiminished during his recent stay in hospital, as he continued to ask “What’s going on out there?”. His fantastic memory allowed him to easily recount details regarding the people he met, places he had been and general life experiences. Like his mother before him, he was always ready to share his knowledge of Mahone Bay’s history and current day happenings. Frank’s desire to support his community led him to serve as a Mahone Bay Town Councillor and to sit on a number of Boards, including the Insurance Brokers Association and the Pharmaceutical Advisory Board. He served for 50 years as a Trustee of Mahone Bay’s Trinity United Church and volunteered countless additional hours on church endeavors. He was also involved in a variety of Mahone Bay-based business activities.

Thank you to all those who held Frank in their thoughts and prayers during his three weeks of illness. A very special thank you to Dr. Heather Robertson and the wonderful staff of South Shore Regional Hospital who provided exceptional comfort and care to Frankie and family.

Flowers by immediate family only. Donations in Frank’s memory may be made to Trinity United Church, Mahone Bay or to a hospital of your choice.