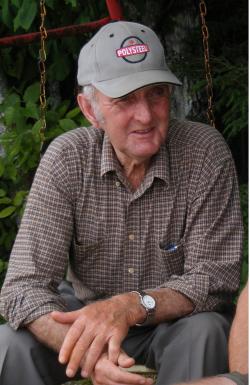 Lawrence S. Veinotte, of Middle New Cornwall, passed away at the age of 94 at Queens General Hospital in Liverpool on November 6, 2020.

Born, raised, and resided in Middle New Cornwall he loved the outdoors, especially the woodlands. Precious memories shared by Lawrence of his childhood include bringing in the firewood for his Mother, picking berries with his sisters in the summertime, attending a one room schoolhouse, and going barefoot as a child from spring until fall. In his younger years he worked with his father and a team of oxen, which involved crossing the Caribou Lake in the winter time into the woods, and even walking all the way to Mahone Bay with his father and oxen (the first time at the approximate age of ten). With his wife Mabel they started a small farm, initially clearing the land with a pair of oxen. As a young couple Mabel and Lawrence competed in plowing matches in Nova Scotia and PEI. Eventually they raised and showed purebred Herefords for a short period of time during the years when his children were active in 4-H. He was a supporter of the 4-H in his community. He loved attending oxen pulls in the county, especially the bow yoke and head yoke matches at the Big EX. Sundays were always a day of rest, with many summer Sundays spent with family and friend playing horseshoes, potlucks, and enjoying many laughs at Caribou Lake and later Little Mush-a-Mush Lake. As a member of the New Cornwall Baptist Church, he faithfully attended. Through the faith community years ago he was active in the Men’s Brotherhood Group and choirs with the New Cornwall, Northwest and Mahone Bay Baptist churches. He enjoyed singing hymns, and was often heard humming some of his favourite hymns. On Christmas Eve he would go to his woodlot and find a Christmas tree close to perfection, however, occasionally, branch or two would be added onto the tree to make it right. The tree had to be decorated perfectly balanced to his eye, including the hanging of tinsel. Later in years his grandchildren decorated the tree with his direction and supervision. Winters were a time for logging & gathering firewood for the next year. He took extreme pride in his woodlots, taking the time to walk over his woodland with anyone that was interested in forestry. He shared his love of the forest and the importance of good forest management practices with his family. He had a special hemlock tree that he shared with a few on Sunday drives, with the tree always receiving a hug. The family business Lawrence S. Veinotte Enterprises Limited was incorporated in 1976. In the early days many of the “young fellas” of the community worked there during the summers mixing concrete in a small quarter yard mixer, and began manufacturing well tile &amp; septic tanks. He liked to work, especially operating machinery. His precision with the excavator was an enjoyment to watch. He continued to operate his machinery up into his late 80’s. In his 90’s he “went with” to visit worksites, always stopping for a milkshake on the drive. Their house always had an open door, where, although most visits were business related, it was the basis for making a living and the beginning of many lifelong friendships. It was frequently a “go to” for help in the community, pulling people out of a snowbank, the ditch or other needed assistance. Through various partnerships Lawrence contributed to the growth of the community in property developments on Big Mush-a-Mush, Little Mush-a-Mush, Church, and Indian Lakes. Many of these developments have grown from summer cottages to year round homes, with many of the new “cabin people” becoming long time friends and neighbours, and valued members of the community.

The family would like to thank our community for their support. We would also like to thank first responders, Queens General and Valley Regional Hospitals for their care of Dad the last few weeks, we appreciate your hard work and dedication.

A private service will be held, due to the restrictions and health risk.

In lieu of attendance, we suggest taking the time to call a neighbour. Memorial donations maybe made to the New Cornwall Baptist Church, St. Mark’s Lutheran Church of Middle New Cornwall or Cornwall and District Fire Department.

Please be advised, the office of Mahone Funeral Home is not able to receive memorial donations at this time due to COVID-19. Please inform the Family of your memorial contribution through our website. Your memorial donation payment may then be sent directly to a requested charity or charity of your choice.