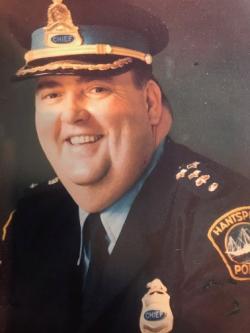 Born in Wolfville, Nova Scotia, on August 4th 1940, he was the son of the late Lester Joseph Keddy and Beatrice May (Spencer) Keddy.

He grew up in Wolfville where he attended school and graduated as a charter member of the class of 1957 from Wolfville High School. After graduation he tried his hand at several different kinds of work. In 1966 he met and married the love of his life, Shirley Marie Saunders. He is a past member of the Wolfville Fire Department. He then became Special Constable with the Wolfville Police Department. In 1967 he joined the Mahone Bay Police Department and served as a constable until 1972 at which time he joined the Hantsport Police Department and served as a constable until 1975 when he was then promoted to Chief of Police and remained in that role until 1980. In 1981 he joined the Nova Scotia Civil Service as a Motor Carrier Inspector serving the South Shore of Nova Scotia and later transferred as a Vehicle Compliance Officer serving at the Enfield scale until his retirement in 2003. Richard enjoyed sports, especially hockey and baseball.

Cremation has taken place under the direction of Mahone Funeral Home, 32 Parish Street, Mahone Bay, Nova Scotia. There will not be a funeral service or flowers at Richard’s request.

Memorial donations in Richard’s honour may be made to the Kidney Foundation of Canada or the Heart and Stroke Foundation of Nova Scotia.

The family would like to extend its thanks to the staff and doctors of South Shore Regional Hospital, Bridgewater, for their care of Richard while he was in hospital.

Please be advised that our business office is temporarily operating on limited hours to the general public until further notice. If you require a visit to our office, please call ahead for an appointment by phoning 902-624-8241. Our Professional “At Need” and “Pre Need” Services continue to be available by appointment by calling 902-624-8241.