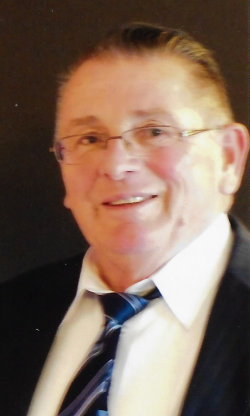 Lawrence Andrew “Lolly” Ernst, 78 of Indian Point, Mahone Bay, passed away suddenly on August 16th 2021. He passed away doing what he loved to do...work.

Born on Rous Island, Indian Point, he was a son of Russell Ernst and Mamie (Wentzell) Ernst.

Lawrence had two brothers and two sisters. He married Geraldine (Ingram) Ernst on September 9th 1972 in Liverpool, NS. Lawrence was a plumber for over 50 years, most of those years were his own business “Ernst Plumbing and Heating” of Halifax. He worked in Canmore and Banff, Alberta for about five years. He attended vocational school in Halifax to obtain his plumbing and heating certification. Lolly loved spending time at his camp where he shared many meals and tales with family and friends. He had four furry Samoyeds he loved dearly, taking them for boat and bike rides to the camp. In his earlier years he competed in the International Dorey Races with his partner, Garnet Heisler, winning many trophies. He was also an avid hockey player. Lawrence enjoyed boating, water skiing and snowmobiling. He would clear the floor at many dances. He was a member of the Armdale Yacht Club for many years. Lolly had a great sense of humor, his favourite past time was teasing family and friends. He was laid back and easy going, not much could phase him. In his later years he enjoyed spending time with his three grandsons.

A graveside service for family and close friends will be held 11am, Saturday, August 21st 2021 in Trinity Anglican Cemetery, Bog Road, Liverpool.

Memorial donations may be made to the Union Church, Indian Point or a charity of your choice.


COVID-19 Restrictions To Be Observed. Mask's are Recommended
and Social Distancing Required.


Please be advised, the office of Mahone Funeral Home is not able to receive memorial donation funds at this time due to COVID-19. Please inform the Family of your memorial contribution through our website. Your memorial donation payment may then be sent directly to the requested charity.