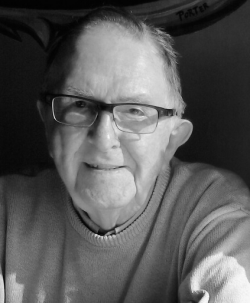 Bob was born in Port Maitland, Nova Scotia, to Jene and Burnett Brown, and spent his teenage years in Yarmouth, whistling, singing, dancing at The Snackery, and playing the piano. He was briefly in the army, but the war ended before he was to be shipped overseas. Gently reared in a very musical family, Bob took his love of music to Toronto, where he studied singing at the Royal Conservatory of Music. He understood early on that his love of music did not include performance, and so took up his trade as a piano tuner and began a long career with the T. Eaton Co. He married Marilyn in 1954 and they started their family life. He was the first man on the Don Valley Parkway every morning, and he travelled the city six days a week for decades, tuning pianos for some greats, including years of working on Oscar Peterson’s pianos. He also met a lot of housewives, ate lunch at a lot of diners, and consumed a lot of Rolaids.

Bob often said those early days - married with two young children in a home of his own - were the best years of his life. Every summer, there was the long drive to Nova Scotia to visit the family, and these trips made so many memories. In spite of a good life in Toronto with many friends and good neighbours, Nova Scotia was home. In 1981, Bob and Marilyn moved back to Nova Scotia for good.

Whether playing, singing, or listening, music was always Bob’s greatest pleasure. He played his piano every day up until the last few weeks of his life, keeping lists of new songs he was working on so he wouldn’t forget. He was an amusing and entertaining bridge partner, happy to have finally taught daughter #2 to play (count your losers!), and loved a snappy (and lippy) game of cribbage. He had a 29 point hand on January 7, 2008 at 9:30 am.

As much as he loved to play piano for his own pleasure, playing for others was another matter. It was a family joke to tell him he was expected to prepare a 45 minute set for some imminent event. He loved babies, dogs, bacon and eggs, coffee, and ice cream. He was a great reader and re-reader, and loved to share and discuss the books that engaged and moved him. But he was not handy. He once put up a shelf with string.

He was a gentle, loving, and funny father, and a good friend to so many. We will miss Big Dad’s quick wit, smart mouth, and his beautiful piano playing. He was kindness and humility in action, and modest about all his talents. (He would want us to remove that last sentence.) He taught us not to take ourselves too seriously, and to be kind, and those are great gifts. A curious Christian, Bob’s faith grew and changed and expanded all of his life.

We are fortunate that we were able to care for him at home for so long, and it’s thanks to all the home care workers, VON visits, and palliative care support that this was possible. Thank you also to the kind people of the Mahone Bay Baptist Church and the Bayview United Baptist Church in Port Maitland.

A service will be held this summer in Port Maitland, Nova Scotia.